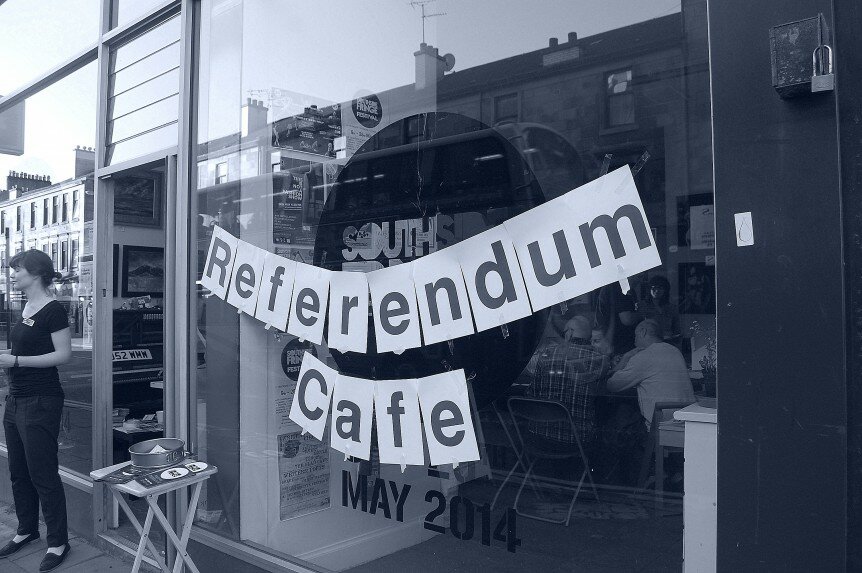 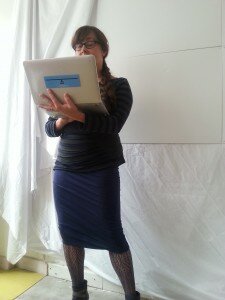 I’ve just come back from “Tea and Cake: A chat about #whatnowscotland” a great session hosted at the Referendum Cafe on it’s last day as democratic hub organised by the energetic Kim Simpson.

A splendid effort by the Referendum Cafe’s lead, Lizzie Smith whose determination to bring politics to the pavement never wavered, nor did the support of Katherine Mackinnon in the process.

The event had some ground rules, an emergent balancing act of discussing a Better Scotland without binary opinion – do not discuss or ask what each other voted and remove your yes/no badge from you jacket showcasing your preference for an independent Scotland.  The consensus seems to be, whatever happened last week, we’ve now got to work together and unite on a better Scotland, much I believe we all voted for.

This new positive union was echoed by all three speakers who spoke of the short coming of the 45% movement, something I also shared in the very early days of the mourning by many yes voters.  To quote Laura Eaton Lewis, the first to set a provocation for the session we need to be the 100%, united in our effort for change.

Laura, who I have had the pleasure of speaking alongside at Imagination Festival is a fearless researcher, writer and fantastic animated speaker.  She elaborated on a new perspective to what we mean by union, a word firmly associated with Better Together in the lead up to the 18th September.  Now, we must rebrand and reclaim this noun as a new power of many, not a choice of ’55’.

Next up was a Dougal Perman, straight off the train and thrust into the packed shop front/democratic hub.  His provocation questioned what the democracy we seek will look and feel like in practice?

Dougald brought ideas to the session about undertaking actions for a better society.  His take on giving more blood, signing up as organ donators, giving to food banks and smiling more at strangers captured the idea of action speaking more than just words and a call for us to sign up to activities and new behaviours that will actively change the aesthetic of our everyday.

Finally up, we had the ever on point Darren Loki McGarvey, rapper come public speaker for the masses.  Darren spoke about flattened leadership of people and new emergent democratic institutions, and questioned how we, as citizens, can share power and proactivity in the light of emergent new leaders.  He called for all of us to question constitutions of parties, to find out how they are constructed, who deals with accounts to ensure we hold our parties and organisations to account and promote open qualities for progress.  Democracy is not about political objectives, democracy is the bi-product of taking part and for that we must ensure news, media and participation is unbiased, accessible and open to all.  Our engagement and participation is democracy is what grassroots is about.

The second half of this post focuses on my suggestion post provocations on discussing social technology and the role it could play, if we are quick off the mark to bring together the many proactive groups and organisations setting up in light of the referendum.  I’m keen to see a flattened leadership, a way of bringing the many efforts of emergent groups and public sector together and accessible to as many citizens as possible.  I want technology to support power of the crowd.

Armed with a sharpe and flipchart I led a discussion seeking for actions and ideas on how we can use social and open source technology to increase democratic participation and tool up citizens.

Democratic representation online in one space

Create a central space in Scotland for Community Council/Political entity meeting notes, decisions, policies.  Include other local authorities entities in this space – accept that one person is not responsible for ‘minute taking’ but in fact many people can have laptops out sharing the collation and synthesis of notes.   This is a central space to access information.  We discussed the need for digital skill training of some of the members of these community councils.

We also considered an easy to use scalable website for community councils to utilise led by the government.  Think a website with similar modules including FAQs, Meeting notes, Calls to actions, Archive functions that look similar but are customisable per area.

(Tools to include would utilise as much as possible existing social tech tools Fix my street, Write to them, Etherpad)

Action – Who wants to build or discuss a scalable community council site and a simple dashboard of social tech tools/toolkit?

A series of how to think digitally, toolkit and training for local political leaders, civil servants, community councils.  A basic suite of how to for digital collaboration.

A focus on libraries and public space providers to utilise one easy to read screen of information on policy, local plans and community councils.  A democracy ‘homepage’ that can be shared across public institutions and customised to the local area.

– We know there are a series of people working on ideas about getting people online, digital inclusion, perhaps we can share this more widely in a section on one of the below sites?

A personal project of mine I’ve wanted to setup for a long time as an umbrella for not for profit social innovation projects in Scotland, but would rather open this out. I’ve bought (the new .scot domain) dotank.scot and will be pulling together a strategy on this front.  If you’re interested in an umbrella brand for pro-active change and efforts in Scotland, let’s grab a coffee.

This links to a later part of our discussion and idea generation on a Do-Tank which is a hybrid of already existing spaces to undertake dialogue and pro-active projects.  Think Referendum Cafe on a more regular basis in either unused shop fronts or an out of the box, turn your bar/cafe into a hub for discussion, debate and projects.  Link this up to a central online space for collaborative projects, research and activity and we could have a centralised space for democratic collaboration between citizens.  Think Basecamp – tasking off projects with milestones outlined.  It means we can put our energy and skills together online.

Action – I can design the interface, I need a developer to help and anyone else who wants to run this?  I have a domain registered, who’s in?

Access online media for older generation and people not online

We discussed the need to not forget and empower others to access information online.  We discussed Newspaper club’s design and accessibility and the clever algorithm built for the Guardian’s long good read.  Could we somehow re-create a community newspaper, easy to print off that can be distributed?

Action – Again, there is alot of work going on around new community news, un-biased etc but we’re thinking a tool for anyone to build a basic newspaper/leaflet with balanced arguments from online content

I actually worked on a similar concept for this with Open Glasgow.  It’s like a gumtree or Freecycle service run by citizens.  This was inspired by a story of a business needing to recycle glass that the council couldn’t provide a service for.  If we could connect people who could use the glass with the need to pick it up, we’d have a citizen run service and a new economy.

Time banking for citizens based around tasks.  New currency for supporting society/civic involvement.  I brought up that Ice Cream Architecture are working on this, so excited to see this come into fruition.  Could be a fantastic underpinning piece of tech for some of the above.

A digital thinking Manifesto for Democracy and progress in Scotland

As our discussion continued we recognised we had discussed a series of principles/manifesto for social tech for democracy.  We’re going to continue to build this here as a manifesto for social tech in an emerging democratic and devolved Scotland.  If you want to get involved, please feel free to contribute and I’ll migrate the manifesto over to an Etherpad hosted most likely on Dotank.scot.

Build wisdom of the crowd

Use technology to flatten leadership, not replace another organisation’s efforts

I said I’d buy some domains and open source this content for collaboration – done already.

Without a doubt, much of the above is in discussion, being built, considered, or thought about by many different parties.  The goal is not to own any of the above but to give it away.  Particularly the concepts and Manifesto for progress inspired by social tech.  I will be updating this blog post over time to flesh out some of the concepts online, most likely through the dotank.scot domain.

Links of interest/looking outwards from our discussion

Commonweal – Have particular plans for alot of this, with Kiltr (see below) so watch this space and their plans on The Common

What do they know

There’s so much more than what is listed above but the crux is can we found some social technologies and put together a sharable framework to ensure all our effort, content creation on empowering Scotland is accessible to all? 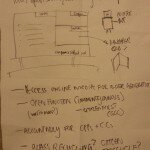 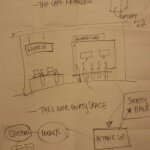 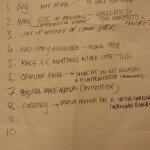 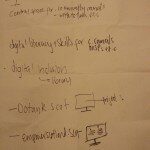 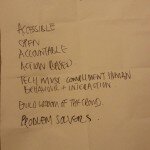